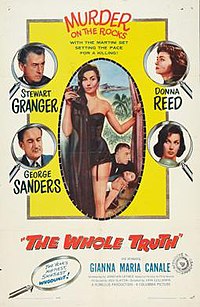 The Whole Truth is a 1958 British thriller film directed by John Guillermin and starring Stewart Granger, George Sanders, Donna Reed, Gianna Maria Canale and Peter Dyneley. It was based on the 1955 play of the same title by Philip Mackie.

While making a film on the French Riviera, the producer Max Poulton has been having an affair with his star, Gina Bertini. A married man, Max does not want to lose his wife Carol, but the hot-tempered Gina threatens to tell all.