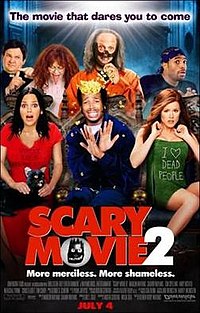 Scary Movie 2 is a 2001 American comedy horror film and the second film in the Scary Movie franchise. The film stars Anna Faris, Regina Hall, Shawn Wayans, and Marlon Wayans (all reprising their roles from the first film, despite their characters having seemingly been killed off), as well as Tim Curry, Tori Spelling, Chris Elliott, Chris Masterson, Kathleen Robertson, David Cross, and James Woods. The film is the last in the series to feature the involvement of stars Marlon and Shawn Wayans, and director Keenen Ivory Wayans. Marlon would eventually go on to produce a similar horror-themed parody, A Haunted House, and its sequel, both starring himself. In the latter film, Wayans pokes fun at the Scary Movie series' decline in quality after his family's departure.

A teenage girl named Megan Voorhees (Natasha Lyonne) becomes possessed by the spirit of Hugh Kane (Richard Moll), the house's previous owner. During a formal dinner party, where everyone is singing “Shake Ya Ass”, she emerges in her nightdress, saying “you suck” before proceeding to urinate profusely on the floor. In response, Megan's mother (Veronica Cartwright) seeks help from two priests, Father McFeely (James Woods) and Father Harris (Andy Richter). After paying a trip to the bathroom, the men attempt to drive Hugh's ghost out, but the exorcism does not go as planned. After everyone vomits on each other, and one of the priests shows signs of pedophilia towards the girl, Megan insults Father McFeely's mother. He responds by pulling out a gun and shooting Megan.