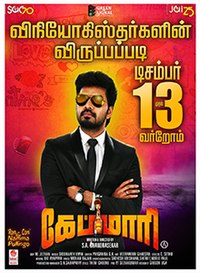 Capmaari is a 2019 Indian Tamil-language romantic comedy film written and directed by S. A. Chandrasekhar. The film stars Jai, Athulya Ravi, and Vaibhavi Shandilya in lead roles. The music is composed by Siddharth Vipin with cinematography by M. Jeevan and editing by Prasanna GK. The film released on 13 December 2019.

Jai (Jai) an IT professional, happens to share a coach with Jeni (Vaibhavi Shandilya) during a train journey. The duo strikes a conversation and soon sharing beers and the bed too. After two years, they meet accidentally in Chennai and recognize each other, and for some inexplicable reason, decide to get married. Meanwhile, Jai's colleague Varsha (Athulya Ravi) has a liking towards him, however, she never explicitly says it out to him, although she shows it in every possible way.