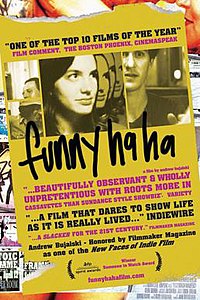 Funny Ha Ha is a 2002 American film written and directed by Andrew Bujalski. It has been described as the first mumblecore film. The film was shot on 16 mm film on a very low budget. It deals with the lives of people in their twenties as they try to come to terms with life after college and confront the responsibilities of adulthood, if only to put them off for as long as possible.

The film follows the exploits of recently graduated protagonist Marnie as she tries to find a temporary job and win the attention of a college friend named Alex (who is already in a relationship), while trying to cut down on her beer consumption. The film's events take place around the Allston neighborhood of Boston, Massachusetts.