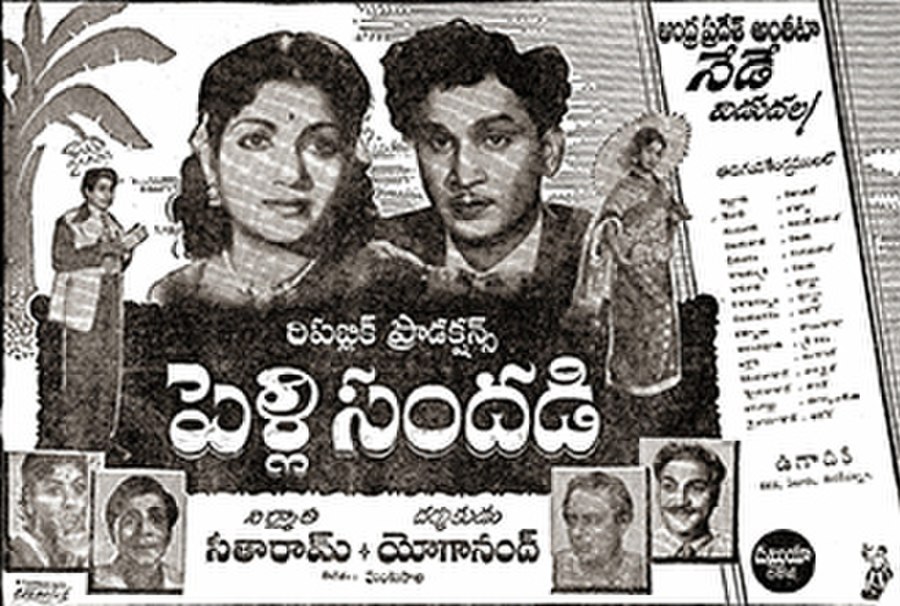 Pelli Sandadi is a 1959 Indian Telugu-language comedy film, produced by Sitaram under the Republic Productions banner and directed by D. Yoganand. It stars Akkineni Nageswara Rao, Anjali Devi, B. Saroja Devi with music composed by Ghantasala.

Captain Kota (Gummadi) retired army officer, lives in a village Vimala Puram. He leads a happy life with his two daughters Anuradha (Anjali Devi) & Priyamvada (B. Saroja Devi) and his younger brother Janardhan / Dhan (Ramana Reddy). But a thing that suffers him is Veeraiah (R. Nageswara Rao) a drunkard always blackmails him for money. Once Kota & Dhan arrange a dance performance of their daughters in the town to raise the funds with false names Angla-Pingla. Gurunatham (Chalam) son of Raobahadoor Gangadharam (C.S.R.) visits that dance program and falls in love with younger girl Priyamwada. To rid off, they invite him to tea, by that time, they leave back. Retired Subedar Anjaneyulu (Dr. Sivaramakrishnaiah) friend of Raobahadoor brings the alliance of Kota's daughters to Gurunatham. Without knowing the reality Gurunatham sends his friend Vasu (Akkineni Nageswara Rao) to Vimala Puram instead of him. After reaching the village, Vasu falls in love with Anuradha. Unfortunately, he struck up for days together and here Gurunatham is undergoing many troubles. Uma (Surabhi Balasaraswati) daughter of Anjaneyulu learns regarding Vasu & Gurunatham's plan and she tries to help them. After some time, Kota calls Raobahadoor to fix up the match. Knowing this Uma gives telegram to Vasu and also tells Gurunatham that seeing the telegram Vasu will return. So, he goes back home when Vasu is trying to escape he is wounded. Anuradha notices and hides him in her room. After arriving Raobahadoor hears that his son has already left, so, he too moves back and immediately Vasu enters the house.