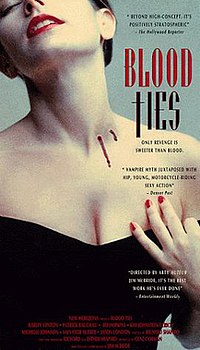 Blood Ties is a 1991 television film directed by Jim McBride and starring Harley Venton, Patrick Bauchau, Jason London, and Michelle Johnson. It is a story about a modern vampire family who hail from Carpathia. The family try to assimilate into American life in Long Beach, California, but their lives are upset when a sinister group of hunters kill a member of their extended kin and threaten to come after them.

The film opens in Loving County, Texas, where a teenage boy named Cody Puckett (Jason London) awakens one ominous night to find his parents staked and burned by a heretic vampire hunter group called the S.C.A.V., which stands for the Southern Coalition Against Vampirism. After shooting him with a crossbow, the vampire hunters allow Cody to escape, hoping he will lead them back to his extended family.