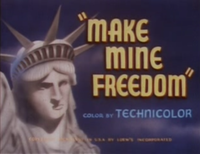 Make Mine Freedom is an American animated propaganda cartoon created by John Sutherland Productions for the Extension Department of Harding College (now Harding University). Financed with a grant from the Alfred P. Sloan Foundation, the cartoon was the first in a series of pro-free enterprise films produced by Sutherland for Harding. The cartoon depicts a satire of perceived life under collectivist ideology.

The film opens with a paean to American values, noting how America means different things to different people. The central conflict in the film concerns four composite characters, a worker, capitalist, politician, and farmer, who all find themselves at odds with each other. A slick salesman approaches the men, offering them a solution to all their problems in the form of a magic tonic known as ISM, which he claims will "cure any ailment of the body politic." He offers the tonic to the men for free, but provides them a contract that requires them to–quite literally–sign away the freedom of themselves, their children, and their grandchildren. Upon hearing this, a sleeping man on a bench wakes up and approaches the group, announcing that he is John Q. Public. He demands to see the contract, examines it, and is astonished that the men would so readily sign away their freedoms. Public then regales the men with a tale of Joe Doakes (another generic American name), a lowly inventor who became wealthy with the help of his family and friends. Public explains that Doakes' success is due to the American system of free enterprise, and that being a capitalist is nothing to be ashamed of. He also notes that America enjoyed a standard of living after World War II unparalleled by any other country. He then invites the men to try ISM and see what its collectivist vision would allegedly bring. The worker finds himself shackled to a machine and branded a state union member, the capitalist removed from his factory, the farmer stripped of his power, and the politician turned into a propaganda speaker. Disgusted with the ISM, the men turn on the salesman and chase him out of town. The film ends with patriotic music backing up the now-united marchers, claiming that an ever-increasing abundance for all is the secret to American prosperity.