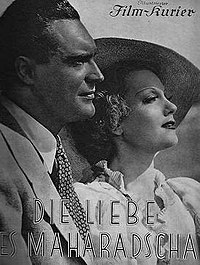 The Love of the Maharaja is a 1936 German drama film directed by Arthur Maria Rabenalt and starring Gustav Diessl, Attila Hörbiger and Hilde von Stolz. It was made as a co-production between the Italian Astra Film and the Munich-based Bavaria Film. A separate Italian version A Woman Between Two Worlds was also produced.