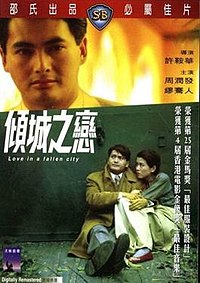 Love in a Fallen City is a 1984 Hong Kong film directed by Ann Hui. It was adapted from the novella of the same name by Eileen Chang, and produced by Shaw Brothers Studio. The movie stars Chow Yun-fat and Cora Miao as the romantic leads.

The film is set in 1940s Shanghai and Hong Kong. Bai Liu-Su (Cora Miao) is an introverted divorcée who has her fair share of misery after breaking up with her good-for-nothing husband. Her large, extended family feels she has shamed them through divorce. Her situation at home has become unbearable. A charming Malayan businessman based in Hong Kong, Fan Liu-yuan (Chow Yun-Fat), who is always surrounded by women, happens to visit Shanghai and becomes interested in Bai after chancing on her through mutual friends. Fan sees in Bai what many others don't and tries his best to make her fall in love again. A middle-aged couple tries to matchmake the two.