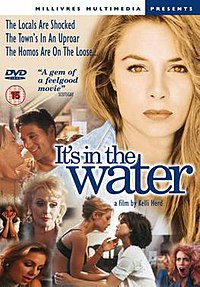 It's in the Water is a 1997 independent film. Written and directed by Kelli Herd, the film touches on themes of homosexuality, AIDS, coming out and small-town prejudice. The film stars Keri Jo Chapman as Alex, Teresa Garrett as Grace, Derrick Sanders as Mark, Timothy Vahle as Tomas, Nancy Chartier as Sloan and John Hallum as Spencer.

Alex is a married Junior Leaguer with a penchant for interesting shoes. Her Junior League chapter's annual project is to volunteer at Hope House, an AIDS hospice that recently opened in her home town of Azalea Springs, Texas. Alex and her League friends, including her friend Sloan, tour Hope House. Alex runs into her best friend Spencer, whose lover Bruce is a resident, and Grace, a friend from high school who had recently moved back to Azalea Springs to work at Hope House as a nurse.