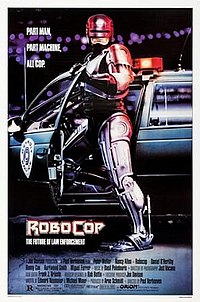 In a dystopian future, Detroit is on the verge of collapse due to financial mismanagement and a high crime rate. The city signs a deal with the megacorporation Omni Consumer Products (OCP) to run Detroit's police department in exchange for letting OCP rebuild run-down sections of the city into a high-end utopia. Senior Vice President Dick Jones demonstrates a new law enforcement robot, ED-209. However, the robot malfunctions, killing an executive. Bob Morton, an ambitious executive, uses the opportunity to introduce his own experimental cyborg design, RoboCop. The chairman is dismayed at the ED-209 failure and approves Morton's plan, to Jones' anger.