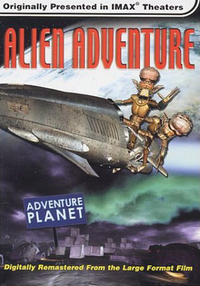 Alien Adventure is a science fiction/slapstick comedy 3D film in IMAX format released in 1999 by nWave Pictures, written and directed by Ben Stassen. The movie was rated G (or the local equivalent) in most countries. It was the first fully digital feature-length film produced for a large-screen format.

The movie begins with an extraterrestrial humanoid species, the Glegoliths, wandering through space in search of a new world. Encountering an unknown planet (which turns out to be Earth), the Glegolith leader (Cyrillus) sends two "manned" probes to the surface to determine if it is suitable for colonisation.