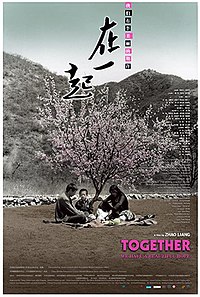 Together (Chinese: 在一起) is a 2010 Chinese film directed by Zhao Liang. It was filmed beside the Chinese film Love for Life, and chronicles the everyday lives of a variety of different people living in China with HIV/AIDS. The film depicts the living conditions of those living with HIV in China, as well as their own personal thoughts on their disease. Together, like the film Love for Life, was commissioned by the Ministry of Health and backed by the Chinese government. Zhao Liang has been seen as a rebel director, producing documentaries that expose the Chinese government of wrongdoing. For instance, his documentary Petition focused on mistreatment of Chinese by local authorities and government officials. Unlike his previous works, Together was made with the Chinese government and was censored, without mention of the mishandling of the HIV/AIDS epidemic in the 1990s and the cover-up by the government. Instead, the documentary focuses more on the actual lives of individuals with HIV/AIDS instead of touching on the past blood-sharing scandal in villages.

The documentary Together begins on the set of the film, with Zhao Liang asking cast members and crew about their opinions on HIV/AIDS. Liang also reveals to cast members and those working on the film that there are cast members who have HIV/AIDS. This revelation receives mixed reactions from the crew, demonstrating a lasting stigma around the disease despite working on a film to promote awareness on HIV/AIDS. Liang also follows actors from the film and extras who have the diagnosis and uses the documentary to let these individuals both share their stories and offer insight to the disease and the effect on their lives and relationships with others. For instance, it is revealed in the documentary that Hu Zetao, who plays the narrator in the film Love for Life, has HIV/AIDS. The documentary looks closely at Zetao's life and relationships with family members; The Lancet noted in 2011 that of the participants in the film, Zetao, who contracted the virus from his mother, was the least isolated by his diagnosis. In fact, most of the participants asked that their identities remain secret.