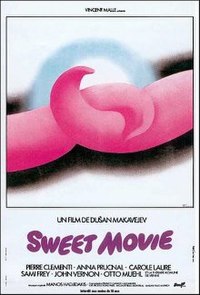 One narrative follows Miss Monde 1984/Miss Canada, who wins a contest of the "most virgin"; her prize is the marriage to a milk industry tycoon. However, following his degrading puritanical introduction to intercourse, she vents her intention to leave to her mother-in-law who, at that point, nearly has her killed. The family bodyguard takes her away, further humiliates her, and finally packs her in a trunk bound for Paris. She finds herself on the Eiffel Tower, where she absently meets and has intercourse with a Latin singer, El Macho. The sexual act is interrupted by touring nuns who frighten the lovers into penis captivus. In her post-coital shocked state, she is adopted into an artist community led by Otto Muehl, where she finds affectionate care. The commune practices some liberating sessions, where a member, with the assistance of the others, goes through a (re)birth experience, cries, urinates and defecates like a baby, while the others are cleaning and pampering him. Later she is seen acting for an obscene advertisement, in which she is naked, covered in liquid chocolate.