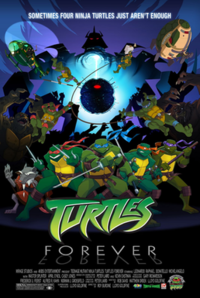 The Ninja Turtles and their master Splinter are startled to watch a video broadcast of the Turtles fighting the Purple Dragons on TV. The Turtles set out to break into the Purple Dragons' HQ to get to the bottom of these doppelgängers, to discover that their "imposters" are actually alternate versions of themselves. They escape together, but the 2003 Turtles find the 1987 team too difficult to control, until they summon Splinter, in whose presence the 1987-Turtles explain that they landed here after fighting the 1987 Shredder and Krang over mutagen in the Technodrome. During the battle, the dimensional teleporter malfunctioned, sending them all to the 2003 dimension. Checking recent tremor reports, the Turtles find the Technodrome, only to have to battle an army of Foot-Bots led by Bebop and Rocksteady.