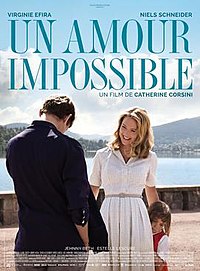 An Impossible Love is a 2018 French drama film directed by Catherine Corsini and based on the best-selling 2015 novel of the same name by Christine Angot.

In the late 1950s in Châteauroux, France, Rachel, a modest office worker, meets Philippe, a brilliant young man born to a bourgeois family. This brief but passionate connection results in the birth of a daughter, Chantal. Philippe refuses to marry outside of his social class and Rachel has to raise their daughter alone. Regardless, Chantal is a great source of happiness for Rachel. She wishes for Philippe to legally acknowledge his daughter, which would give her his last name. A battle of more than ten years ensues, which will eventually break up all of their lives.