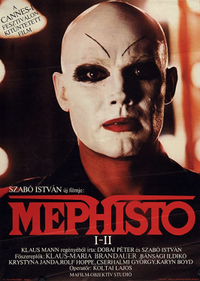 Mephisto is a 1981 drama film based on the novel of the same title by Klaus Mann. Directed by István Szabó, produced by Manfred Durniok, with a screenplay written by Péter Dobai and Szabó, Mephisto follows a German stage actor who finds unexpected success and mixed blessings in the popularity of his performance in a Faustian play as the Nazis take power in pre-WWII Germany. As his associates and friends flee or are ground under by the Nazi regime, the popularity of his character ends up superseding his own existence, until he finds that his best performance is keeping up appearances for his Nazi patrons. The film stars Klaus Maria Brandauer in the main role, alongside Krystyna Janda and Ildiko Bansagi in supporting roles.

The film adapts the story of Mephistopheles and Doctor Faustus by revealing the costs to the main character Hendrik Höfgen as he abandons his conscience and continues to perform, ingratiating himself with the Nazi Party in order to retain his job and improve his social position.