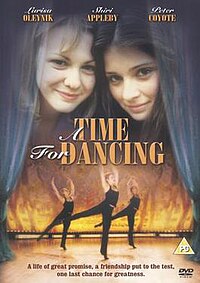 A Time for Dancing is a 2002 American drama film directed by Peter Gilbert and starring Larisa Oleynik, Shiri Appleby and Peter Coyote. It is an adaptation based on the by Davida Wills Hurwin.

Sam Russell (Shiri Appleby) tells the story of her best friend Jules Michaels (Larisa Oleynik). They met at the age of 6 in a dance class. Over the years they become best friends. Sam dances, but Jules is a true dancer, with true passion towards it and views it as important as life itself. Unfortunately, her passion becomes impossible when it turns out she has cancer.