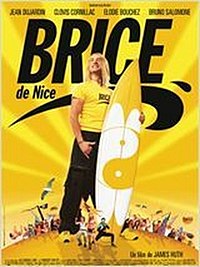 Brice de Nice (, literally Brice from Nice) is a 2005 French comedy film directed by James Huth, written by Huth, Jean Dujardin, and Karine Angeli, and starring Dujardin. It is set in France, centering on the character Brice of Nice ("Brice de Nice") originally created by Dujardin for a stage sketch. A sequel to the film, Brice 3, was released on 19 October 2016.

The main character, a thirty-something surfer named Brice, lives for one thing: the perfect wave to surf, despite the fact that Nice lies on a completely waveless bay on the Mediterranean Sea. While waiting, he uses his rich father's money to throw outrageous parties and develop hilarious insults, as well as worship the film Point Break.