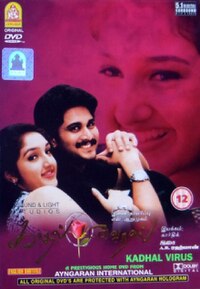 Kadhal Virus is a 2002 Indian Tamil-language romance film written, directed and produced by Kathir. The film featured Richard and Sridevi Vijaykumar making their acting debuts in Tamil in the lead roles with Abbas in a supporting role. A. R. Rahman composed the music for the film, while Arjun Jena was the cinematographer for the project. The film tells the story of a young director, trying to pursue his dream by overcoming all hurdles. After much delay, the film opened in December 2002. Unlike his previous two films Kadhal Desam and Kadhalar Dhinam, Kathir's Kadhal Virus was ultimately panned by critics and fared poorly at the box office.

Deepak is a budding filmmaker trying to get his first production out. He meets and falls in love with Geetha, and decides to take his relationship with her further once his first film is made. Misunderstandings lead to their separation, and her eventual marriage to Rajiv, a struggling actor who is looking for a role in Deepak's next film.