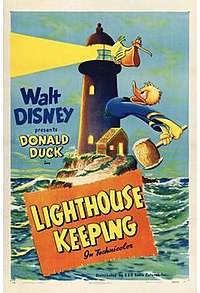 Lighthouse Keeping is a 1946 American animated cartoon directed by Jack Hannah and produced by Walt Disney. In the cartoon, Donald battles with an angry pelican to keep his lighthouse light on.

Donald is bored with his job as a lighthouse keeper, and decides to wake up a sleeping pelican by shining the light on him. The pelican gets fed up and invades the lighthouse, putting out the light. Donald and the pelican engage in a fast-paced duel for the rest of the night, turning the light on and off, even continuing after sunrise.