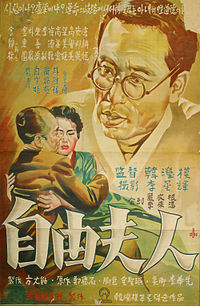 A romantic melodrama depicting the extramarital dalliances of a professor and his wife who works at a boutique. Oh Seon-Yeong accepts a job as a cosmetics store manager to supplement her husband's small income as a professor. Their next door neighbor frequently professes his attraction to her, and she allows him to teach her dancing and introduce her to alcohol. Her boss' husband also begins a flirtation with her which escalates to the point of being found by his wife as they are about to consummate their "dating." Meanwhile, her husband faces a strong attraction to a pretty woman in a grammar class he teaches for secretaries, frequently staying out late walking with her, though he resists her request to take matters further. Her neglect of their son, coupled with anonymous warnings her husband receives about her behavior, result in her being thrown out of the home – the film closes with her weeping outside the gate. The son begs to see her one last time, forcing the father to reluctantly allow him to say goodbye to his mother before she is left on the streets.