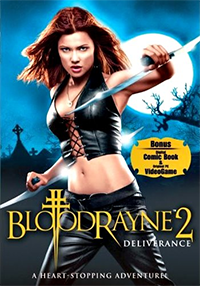 Newton Piles (Chris Coppola), a reporter on assignment for the Chicago Chronicle, has come to the town of Deliverance, Montana, to record tales of the Wild West. The peaceful and quiet town is expecting the arrival of the first Transcontinental Railroad in one week. Along with the railroad however, arrives an unwelcome and deadly guest, a vampiric Billy the Kid. Using the railway, the 357-year-old Transylvanian vampire is building an army of cowboy vampires to take over the country and create a vampire kingdom in the New World. Billy and his horde go on a rampage, slaughtering townspeople and rounding up children. Billy spares Newton's life and promises Newton the greatest story ever told.