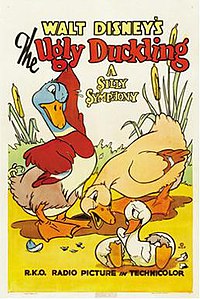 The Ugly Duckling is an animated film from 1939 by Walt Disney, based on the fairy tale "The Ugly Duckling" by Hans Christian Andersen. The film was directed by Jack Cutting and Clyde Geronimi, and released in theaters on April 7, 1939. Music was composed by Albert Hay Malotte, who was uncredited for the film. The animated short was first distributed by RKO Radio Pictures.

An expectant mallard duck father is pacing by his wife's side. Suddenly, the mother duck's eggs begin to hatch, much to the father's delight, giving birth to four little ducklings. But then, a fifth egg hatches, revealing a mismatched white duckling, and the father argues with the mother over this. (It is implied that the father is accusing the mother of having an affair.) The ugly duckling attempts to join the duck family, but they turn their backs on him. So the duckling attempts to join other families, including a family of birds and even attempts to befriend a duck hunting decoy, but they all turn him down. The duckling feels sorry for himself until a mother swan and her cygnets approach him. He joins this family and they accept him. The mother duck and her ducklings are surprised to find he has found his real family and bid him farewell.