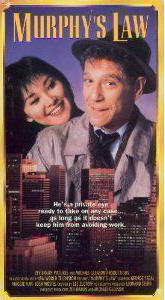 Murphy's Law is an American crime drama that starred George Segal and Maggie Han, loosely based on the Trace and Digger novels by Warren Murphy. The opening theme song, which replaced an instrumental by Mike Post, was an edited version of "Murphy's Law," a song featured on the album "High Crime" by Al Jarreau. The series premiered November 2, 1988 on ABC. On March 9, 1989, ABC announced that it had canceled the series and that the final episode would air on March 18, 1989. The actual final, unaired episode, entitled "Alls Wrong That Ends Wrong," resolved a key storyline in the series (recovering alcoholic Murphy was awarded custody of his daughter from his estranged ex-wife) and also served an unsold pilot for a spin-off starring Joan Severance