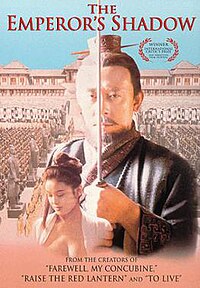 The Emperor's Shadow is a 1996 Chinese historical film directed by Zhou Xiaowen and starring Jiang Wen, Ge You, Xu Qing and Ge Zhijun. It was the most expensive Chinese film produced at the time of its release.

Set in third century BC China, the story of The Emperor's Shadow revolves around the relationship between Ying Zheng, the King of Qin, and later the First Emperor; and the musician Gao Jianli. Gao Jianli's mother was the king's wet nurse when the young king was a hostage in the Zhao state, but they were separated after the former returns to Qin to become king.