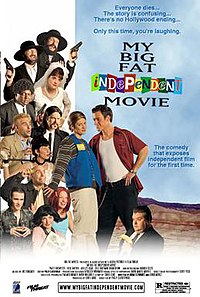 A black man molesting a white man who has trouble remembering events for more than 15 minutes at a time. The film then cuts forward in time to two talkative hitmen, Sam (Neil Barton) and Harvey (Eric Hoffman), who mistakenly believe Johnny Vince (Darren Keefe), a hipper-than-thou swingin' hepcat and band trombone player, to be the third member of their gang, assembled by their evil crime boss to pull a "botched robbery" in Las Vegas. Along the way, they take a beautiful demented hostage – the lovely, desperate and lonely cashier Julianne (Paget Brewster). They are unaware that she will forever change their pathetic lives. During the journey, the foursome encounter a variety of characters inspired by famous independent films, including a bald genius, a forgetful thug, a jogging red-head, a bound and gagged girl, rabbis on a mission, many lesbians, Project Greenlight's Pete Jones, a crazed though well-dressed mechanic (Clint Howard), a horny answering machine (Jason Mewes), a naive mariachi, an obnoxious practical-joking love-struck French girl, and finally Pauly Shore as himself.