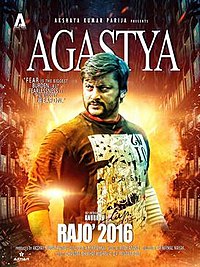 Agastya is a 2016 Indian Odia action thriller film directed by K. M Krishna and produced under Akshya Parija Productions. It was released on 12 June 2016 at Rajo Festival. It was one of the best flop Odia movies in 2016. Anubhav Mohanty, Akash, and Jhillik play lead roles. It is a remake of the 2014 Kannada action movie Ugramm. The music was released by Amara Muzik.