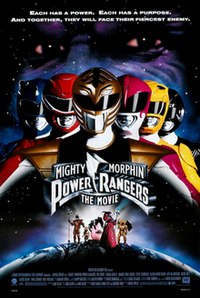 Mighty Morphin Power Rangers: The Movie is a 1995 American superhero film. It stars the ensemble cast of Karan Ashley, Johnny Yong Bosch, Steve Cardenas, Jason David Frank, Amy Jo Johnson, and David Yost alongside the villains cast from the original series and Paul Freeman as Ivan Ooze. Much like the television season that followed the release, it used concepts from the Japanese Super Sentai series Kyoryu Sentai Zyuranger, Gosei Sentai Dairanger and Ninja Sentai Kakuranger. It is the first Power Rangers production from Saban Entertainment not to feature any archived footage from Super Sentai. The events of the film take place after the second season of Mighty Morphin Power Rangers, but are incompatible with the third season, which provides a different explanation for the Rangers gaining their Ninja Ranger powers and Ninjazords, indicating they are set in different continuities.

The Mighty Morphin Power Rangers participate with Bulk and Skull in a charity skydive for the Angel Grove observatory, in anticipation of Ryan's Comet which is scheduled to pass by in two days. Bulk and Skull miss the target landing zone and accidentally land in a construction site where a giant egg has been unearthed. Lord Zedd, Rita Repulsa, Goldar, and Mordant arrive at the construction site and crack open the egg, releasing sorcerer Ivan Ooze, a morphological being who ruled Earth with an iron fist 6,000 years ago before he was overthrown by Zordon and a group of young warriors. The Rangers find and confront him, but Ivan unleashes some ooze monsters on them. While the Rangers battle and successfully defeat them, the fight distracts them long enough to allow Ivan to escape and he lays siege to the Rangers' Command Center and incapacitates Zordon, robbing the Rangers of their powers. As the Rangers return to the Command Center, they find it destroyed and Zordon, being outside his time portal, aging and dying.