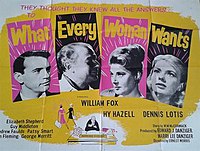 What Every Woman Wants 1962

What Every Woman Wants is a 1962 British comedy film directed by Ernest Morris and starring James Fox, Hy Hazell and Dennis Lotis. The screenplay concerns a marriage guidance counsellor who struggles with his own domestic life.

In this marital comedy, married mother Jean Goodwin (Hy Hazell) and her daughter Sue (Elizabeth Shepherd) team up to reform their husbands, to get them to pay more attention to them. Their elaborate plan causes comic mayhem.