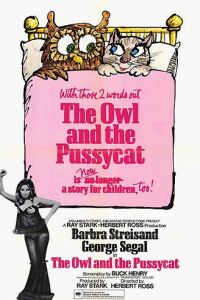 The Owl and the Pussycat is a 1970 American romantic comedy film based upon the 1964 play by Bill Manhoff, directed by Herbert Ross and starring Barbra Streisand and George Segal. Streisand plays the role of a somewhat uneducated actress, model and part-time prostitute. She temporarily lives with an educated aspiring writer played by Segal. Their many differences are obvious, yet over time they begin to admire each other. Comedian/actor Robert Klein appears in a supporting role.

Felix Sherman (Segal), a nebbish book clerk and aspiring novelist, struggles to maintain peace and quiet in his walk-up New York City apartment. When he reports to his landlord that his brass, uneducated neighbor Doris (Streisand) is working as a prostitute, she is suddenly evicted. She then confronts him about this immediately, in the middle of the night. Felix, who hadn't intended that she actually be evicted, reluctantly agrees to let her stay at his apartment on a temporary basis.