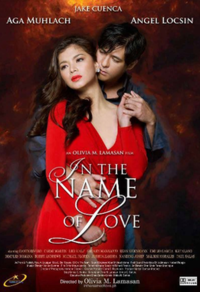 In the Name of Love is a 2011 Filipino romantic drama film directed by Olivia Lamasan and starring Aga Muhlach, Angel Locsin, and Jake Cuenca. The film is a part of the special presentation for Star Cinema's 18th anniversary. The film premiered on May 11, 2011. It is produced and released by Star Cinema.

With barely anything to live for, Emman Toledo (Aga Muhlach), a former dancer, is just about to start his life all over again. He holds the good memories of his past dearly, knowing he will never be able to bring back his better days. An unlikely opportunity comes up when he is assigned to be the dance instructor for the upcoming Governor's Ball of the powerful political family of the Evelinos, a chance for him to rekindle his lost passion.