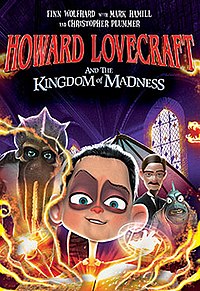 Howard Lovecraft and the Kingdom of Madness 2018

After the events that occurred in the Frozen Kingdom and the Undersea Kingdom, young Howard finds himself at home. The walls of reality are thinning making the world vulnerable to dangers from beyond. Howard follows his father, Uncle Randolph and Dr. Henry Armitage as they journey to Antarctica, to prevent awaking of the destroyer of worlds, Cthulhu.