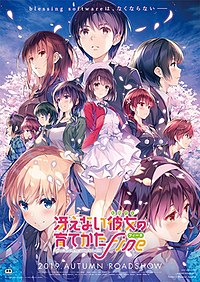 Saekano the Movie: Finale is a 2019 Japanese animated romantic comedy film adapted from the eighth to final volumes of the light novel series Saekano: How to Raise a Boring Girlfriend written by Fumiaki Maruto and illustrated by Kurehito Misaki. The film was originally released on October 26, 2019 in Japan.

The movie starts out with members of circle (aka Michiru's music group) performing at a convention. This is followed up by Katou Megumi, Tomoya Aki meeting up with everyone for an after-event party and discussing the progress of Blessing Software's game for the second winter komiket. Kasumigaoka and Eriri go on and tease Megumi about the first kiss Tomoya had and his reaction to it (Season 2 last episode). The group is cheerfully enjoying when Kosaka Akane walks in, complaining that Kasumigaoka and Eriri submitted their work late and also did a shabby job on it. They have a conflict on some of the scenes of the work they submitted and argue about the many possibilities which can make it better.