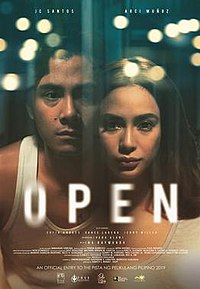 Open is a 2019 Philippine romance drama film directed by Andoy Ranay starring JC Santos and Arci Muñoz. The film was produced by Black Sheep Productions and T-Rex Entertainment as their theatrical debut and is distributed by Star Cinema. The film also produced by executive producers Carlo L. Katigbak, Olivia M. Lamasan and Rex A. Tiri. The film is one of the entries for the Pista ng Pelikulang Pilipino 2019. The film was released on September 13, 2019.