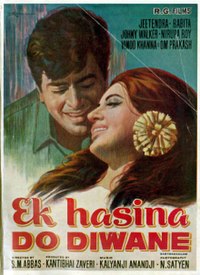 Ek Hasina Do Diwane is a 1972 Hindi-language romance film, produced by Kantibhai Zaveri under the R. G. Films banner and directed by S. M. Abbas. It stars Jeetendra, Babita and Vinod Khanna in pivotal roles and the music was composed by Kalyanji Anandji.

Amar (Jeetendra), the Nainital-based, orthodox and traditional person, obtains a degree in Engineering and re-locates to Bombay for employment. After doing so, he decides to assist his friend, Prakash (Vinod Khanna), woo a wealthy and educated woman, Neeta (Babita) but ends up falling in love and marrying her himself much to the chagrin of her father (Om Prakash). Shortly after the marriage, he takes her to visit his widowed-schoolteacher mother (Nirupa Roy), but she has gone on an outing. They return, and shortly thereafter arguments ensue, which escalate to such an extent that Amar assaults her, compelling her to return to her parents' home. When she insists on a divorce - Amar refuses until and unless she lives with him for 15 days in order to create a false scenario of a happy marriage for his mother.