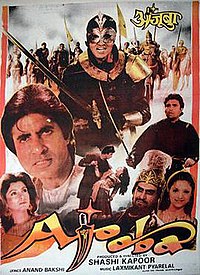 Ajooba is a 1991 superhero film, produced and directed by Shashi Kapoor and also co-directed by Soviet filmmaker Gennadi Vasilyev. An Indian-USSR co-production, it is loosely based on Arabic folklore (such as One Thousand and One Nights). The film had a Russian language version released in the Soviet Union as two parts, Vozvrashcheniye Bagdadskogo Vora (The Return of the Thief of Baghdad) and Черный принц Аджуба (Black Prince Ajuba).

The Afghan kingdom of "Baharistan" is ruled by a just and kind Sultan, Ali Rizwan Mohhamad Dokeer Khan (Shammi Kapoor). All is well in the land except that the Sultan seemingly can't have children. An evil devil-worshipping Vazir (Amrish Puri) seeks to usurp the throne, revive his "fauladi shaitan" (a huge demon-like figure made of stone), and take over the world. The Vazir instructs his maids to strangle every child born to the Sultan. Finally, however, a spark of divine intervention (presented literally as a spark which descends from the heavens and enters the womb) renders the next newborn son immune to the poisons and strangulations administered by the maids. This Shehezada (prince) eventually becomes Ajooba (miracle).