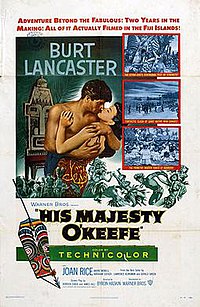 His Majesty O'Keefe is a 1954 American adventure film directed by Byron Haskin and starring Burt Lancaster. The cast also included Joan Rice, André Morell, Abraham Sofaer, Archie Savage, and Benson Fong. The screenplay by Borden Chase and James Hill was based on the novel of the same name by Laurence Klingman and Gerald Green (1952).

Captain David O'Keefe, seeking his fortune in the 19th century South Pacific, decides to enlist island natives to harvest copra, but runs into a wall of cultural problems. Backed by a Chinese dentist, he obtains a ship and sets about harvesting copra while fending off cantankerous native chieftains and ambitious German empire-builders. The natives, happy with their existence, see no reason to work hard to obtain copra, either for a German trading company or for O'Keefe. He finally motivates them by showing them how to produce large quantities of Rai stones, the stone money of Yap, their valued coinage.