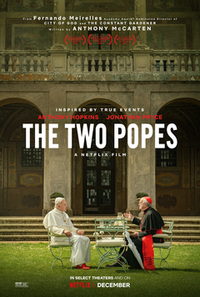 The Two Popes is a 2019 biographical drama film directed by Fernando Meirelles and written by Anthony McCarten, adapted from McCarten's play The Pope which premiered at Royal & Derngate Theatre in 2019. Predominantly set in the Vatican City in the aftermath of the Vatican leaks scandal, the film follows Pope Benedict XVI, played by Anthony Hopkins, as he attempts to convince Cardinal Jorge Mario Bergoglio, played by Jonathan Pryce, to reconsider his decision to resign as an archbishop as he confides his own intentions to abdicate the papacy.

In April 2005, Cardinal Jorge Mario Bergoglio, the Archbishop of Buenos Aires, is called to Vatican City after the death of Pope John Paul II to elect a new pope. German Cardinal Joseph Ratzinger is elected Pope Benedict XVI; Bergoglio receives the second-highest vote count. Seven years later, the Catholic Church is embroiled in the Vatican leaks scandal, and Benedict's tenure has been tainted by public accusations regarding his role in the coverup.