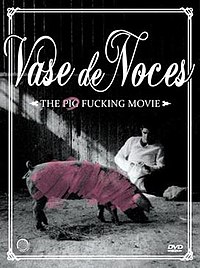 The film follows a man, who has an intellectual or mental disorder, living alone on a farm in rural Belgium. He demonstrates bizarre behavior from the beginning, such as fastening doll's heads to pigeons, collecting his feces in glass jars and beheading a hen for his own amusement. He is also obsessed with a sow who lives on the farm.