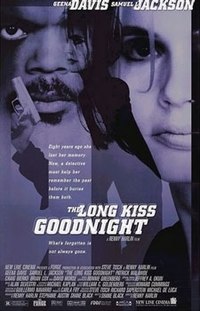 The Long Kiss Goodnight is a 1996 American action thriller film co-produced and directed by Renny Harlin, and produced by Shane Black and Stephanie Austin with screenplay written by Black. It stars Geena Davis, Samuel L. Jackson, Tom Amandes, Yvonne Zima, Brian Cox, Patrick Malahide, Craig Bierko and David Morse. The story follows an amnesiatic schoolteacher (Davis) who sets out to recover her identity with the help of a private detective (Jackson) when they discover a dark conspiracy.

Samantha Caine is a schoolteacher in small-town Honesdale, Pennsylvania, living with her boyfriend, Hal, and her daughter, Caitlin. Eight years earlier, she was found washed ashore on a New Jersey beach, pregnant with Caitlin and totally amnesiac. Having never remembered her real name, "Samantha" has hired a number of ineffective private investigators to discover her past, the latest being the down-on-his-luck Mitch Henessey. During the Christmas holidays, Samantha is involved in a car accident and suffers a brief concussion; when she recovers, she finds she possesses skills with a knife that she cannot explain. Shortly thereafter, the family home is broken into by "One-Eyed Jack", a convict who escaped from jail after seeing Samantha's face on television. Samantha demonstrates her fighting prowess by killing Jack bare-handed. Worried that she poses a danger to Hal and Caitlin, Samantha leaves with Mitch, who has found a suitcase belonging to her, to seek out answers.