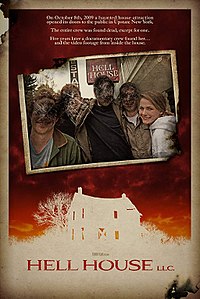 Hell House LLC is a 2015 American found-footage horror film written and directed by Stephen Cognetti and produced by Fbi Films. The film, shot as a documentary, follows a group of Halloween haunted house creators as they prepare for the 2009 opening of their popular haunted attraction, Hell House. Tragedy strikes on opening night when an unknown "malfunction" causes the death of fifteen tour-goers and staff. The film reveals the lead-up to the tragedy and documenting what exactly went wrong that night which has been a mystery to the public. The film was released on a number of video on-demand platforms, including Amazon Video, Shudder, YouTube, Vudu, and iTunes, on November 1, 2016.