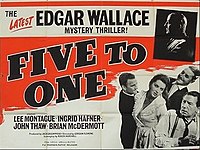 Five To One is a 1963 British crime film directed by Gordon Flemyng and starring Lee Montague, Ingrid Hafner and John Thaw. It was made at Merton Park Studios as part of the long-running series of Edgar Wallace adaptations; this being adapted from one of Wallace's short stories.

Alan Roper, along with his partner-in-crime and his girlfriend, are planning the robbery of a betting shop. Alan asks