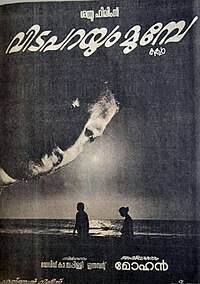 Vida Parayum Munpe is a 1981 Malayalam language film written by John Paul, directed by Mohan, and produced by Innocent. Prem Nazir plays the lead role in the critically acclaimed and commercially successful film. His performance also won great appreciation. Nazir was conferred the Special Jury Award at the 1981 Kerala State Film Awards for his performance. Nedumudi Venu does the other major role. This movie is the direct adaption of the Hrishikesh Mukherjee-directed Hindi title Anand. Though there are claims that this movie is a direct adaption of the Hindi movie Anand, it is much different.

Xavier, a stenographer in a company tries the patience of the workaholic manager with his irregular hours of work. The manager warns him, but he doesn't make any effort to improve. Once, he asks for leave to take his wife to the hospital. The manager later finds him at the beach playing with children and dismisses him from the job. Later the manager finds from his family doctor that Xavier is a cancer patient.