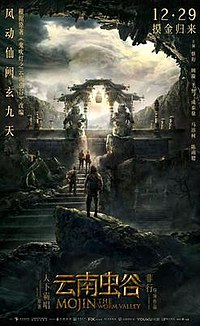 Mojin: The Worm Valley is a 2018 Chinese action adventure fantasy film. It is directed by Fei Xing and starring Cai Heng, Gu Xuan, Yu Heng, Chen Yusi. The film was released in Mainland China on December 29, 2018.

Hu Bayi, Wang Fatzi, Shirley Yang and others pass through the secret underground waterway of the ancient Longfeng Mountains to find the Tomb of Emperor Xian in Yunnan province. The tomb is located on a dangerous island full of ancient monsters, including an ancient undying worm. They also face other dangers in the form of peculiar fishes and dead humans enslaved by toxic worms living inside their bodies. Going deep into the jungle, they are constantly being challenged by monsters. The group fight their way through every obstacles and find the key element that is needed to break the Ghost Eye curse.