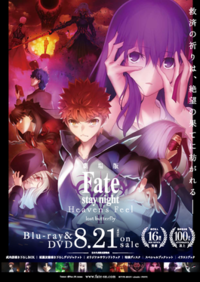 After Saber's disappearance, Shirou Emiya is effectively disqualified from the Holy Grail War but intends to continue fighting regardless. After returning from a meeting with Rin Tohsaka, Shirou finds Sakura Matou has been kidnapped by her brother Shinji, and the two confront him. Sakura pleads for everyone to stop, and Rider heeds her call, revealing Sakura as her true Master. Faced with the reality that he will never be a Magus, Shinji douses Sakura with a potion that makes her lose control of her mana and flees. Archer and Rin attack Sakura, but Rider defends her and starts turning them to stone with her gaze – revealing her identity as Medusa. However, when Shirou is hurt and loses consciousness, Sakura's grief causes her to injure herself, forcing Rider to stop.