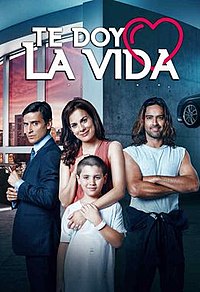 Te doy la vida (English: I Give You My Life) is a 2016 Chilean telenovela created by María José Galleguillos, that premiered on Mega on May 4, 2016 and ended on November 23, 2016. It stars Celine Reymond and Cristián Riquelme.

The plot revolves around Fabián Garrido (Cristián Riquelme), a mechanic who works downtown. One day Fabián meets Isidora Valdés (Celine Reymond), a young woman who needs to save her son. It turns out that Fabián is the father of Isidora's son, and he can donate his spinal cord to save the boy. Although Isidora is married to Emilio San Martín (Álvaro Espinoza), a successful lawyer, Fabián slowly begins to fall in love with her and soon she starts to correspond Fabián's feelings.