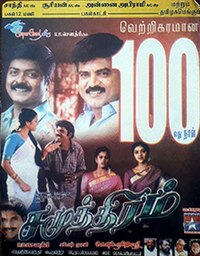 Samuthiram is a 2001 Indian Tamil-language drama film written by Erode Sounder and directed by K. S. Ravikumar. The film stars an ensemble cast of Sarath Kumar, Murali, Manoj Bharathiraja, Kaveri, Abhirami, Sindhu Menon and Monal. The film's score and soundtrack are composed by Sabesh-Murali. The film was released on 31 August 2001. The film was remade in Telugu as Siva Rama Raju with Jagapathi Babu, in Bengali as Kartabya, and in Kannada as Paramashiva with V. Ravichandran. Even though it got mixed reviews, it became a "superhit" at the box office.

Selvarasu (Sarath Kumar) is the head of his family, and his two brothers Thangarasu (Murali) and Chinnarasu (Manoj Bharathiraja) are ready to give up their lives for him. The three brothers are very fond of their sister Rasamani (Kaveri). A rich man from the neighboring village (Pyramid Natarajan), Chinniyampalyam Zamin Rangarajan, feels insulted when Thangarasu mishandles his son Aakash (Akash) during a temple festival, and to take revenge, he comes with a wedding proposal to make Rasamani his daughter-in-law. At the time of the wedding, the groom's family demands the entire wealth of Selvarasu to be transferred to Rasamani as the dowry, for which Selvarasu and his brothers agree. The brothers are insulted at every opportunity, while Rasamani is also ill-treated by her husband and father in law.