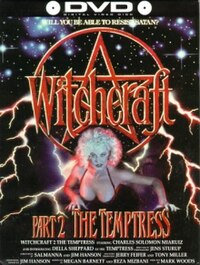 Witchcraft II: The Temptress is a 1990 horror film directed by Mark Woods and starring Charles Solomon, Delia Sheppard, David Homb, Mia M. Ruiz, Jay Richardson, Cheryl Janecky, Mary Shelley, and Frank Woods. The screenplay was written by Jim Hanson and Sal Manna. The film is a sequel to the 1988 direct-to-video film Witchcraft, and the second film in the WitchCraft Horror Series. It is followed by Witchcraft III: The Kiss of Death.

About 18 years after the first film's ending, William Adams is living with his adopted parents and assumes he is a normal 18 year old. He is unaware of his adoption. Williams's adoptive parents stole him away from the coven in the previous film, as they are white witches who did not agree with the aims of their coven. They have hidden William in the suburbs to protect him from evil.