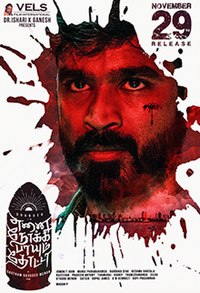 Enai Noki Paayum Thota is a 2019 Indian Tamil-language action thriller film written, directed and co-produced by Gautham Menon. The film features Dhanush, Megha Akash, Sasikumar and Sunaina in the lead roles. The film began production in March 2016 and was completed in September 2018. It was released on 29 November 2019.

The story starts off with Raghu (Dhanush) about to be shot and subsequently subduing his attackers. He defeats most of them but one guy shoots a bullet at him. The story is then told in flashbacks.